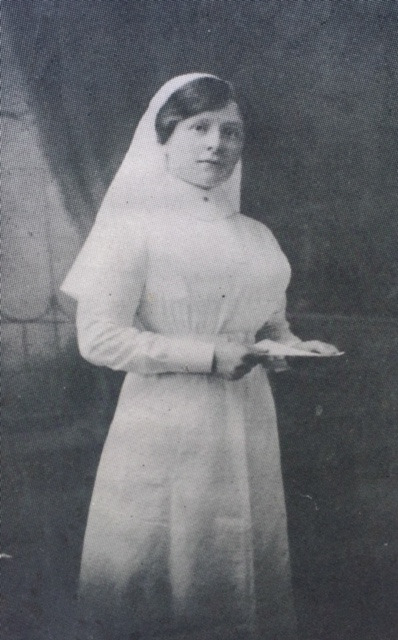 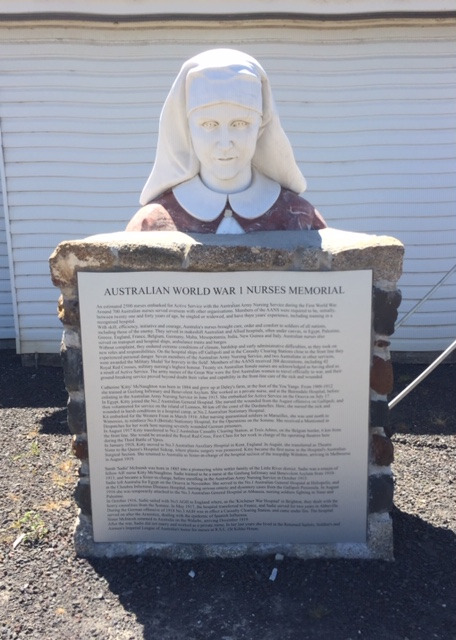 Catherine McNaughton, known as Kitty, was born in March 1884. She was one of seven children born to James and Annie (nee Baxter) of Little River in Victoria, and the grand daughter of one the first white settlers in the same district.

Kitty trained as a nurse at the Geelong and Benevolent Asylum from 1909 to 1912. She then went on to work as a private nurse and at Bairnsdale Hospital. Following the Gallipoli landing with its dreadful casualties, Kitty decided to enlist in the Australian Army Nursing Service.

War Service
Kitty enlisted as a Staff Nurse on 17 July 1915. She was assigned to the No 2 Australian General Hospital and embarked on the HMAT Orsova, bound for Egypt. She arrived in Cairo just in time to nurse the flood of wounded soldiers coming in from the second offensive on Gallipoli. Following a month at the hospital, which was based in the converted Ghezirah Palace Hotel, Kitty volunteered to serve on the island of Lemnos, off the coast of Gallipoli. She served there for about four months, working round the clock treating badly wounded soldiers, with very limited medical supplies and a desperate lack of fresh water. Conditions on the island were primitive. Kitty lived under canvas there. Food and clothing were inadequate and serious disease was rife.

After the evacuation of Gallipoli, Kit returned to Egypt, before embarking with her hospital for France in March 1916. On their arrival in Marseilles, troops were pouring into the city from the Middle East on their way to the Western Front, and many arrived sick. Kit set to work nursing the soldiers who were placed in quarantine. The aim was to filter and isolate soldiers showing symptoms of serious diseases such as small pox, diphtheria and typhoid, in order to stop these diseases spreading to the troops on the Western Front.

In June 1916, Kitty was posted to Wimereux near Boulogne, in preparation for operations on the Somme. She was assigned to a British hospital, the No 8 Stationary Hospital. One of the roles of this hospital was to treat severely injured enemy soldiers who had been captured, many with appalling high velocity shell wounds. Kitty was assigned to nurse these wounded German soldiers, ‘My Huns’, as she called them. She was often alone on a ward with up to 40 seriously wounded men. On just one day, she nursed 11 men who had lost their legs, others who had lost arms, and many with severe head and chest injuries. On 18 November 1916, in recognition of her harrowing work, Kit was mentioned in dispatches ‘for distinguished and gallant service and devotion to duty’.

In August 1917, Kitty was moved to the Australian Casualty Clearing Station near Steenwerck on the Belgian border, just six kilometres from the front line and in the line of shelling. Here, Kitty was in charge of the operating theatres during the Battle of Passchendaele, treating the wounded coming straight from the front line.

At the end of 1917, Kitty went on leave to England. Having completed two and a half years of relentless, gruelling service, Kitty was exhausted, and was retained in England. She initially served in the operating theatres of No 3 Australian Auxiliary Hospital in Dartford, Kent.

In August 1918, Kitty was transferred and promoted to Theatre Sister at Queen Mary’s Hospital in Sidcup. This hospital was established to deal with the serious facial and jaw injuries coming from the Western Front, and the hospital pioneered what we now know as plastic surgery. Kit worked in the operating theatres with renowned Australian surgeon Colonel Sir Henry Newland, in the process becoming the first Australian plastic surgery nurse.

Kitty returned to Australia in July 1919 on the HMAT Wiltshire, serving as Sister in Charge of the ship’s hospital. Whilst on that journey it was announced that she had been awarded nursing’s highest honour: The Royal Red Cross, First Class, for exceptional services in military nursing.

Post War
Kitty arrived back in Melbourne in August 1919. Unsurprisingly, she was quite changed by her experience of war. She was in poor health, had lost two stone in weight and had become a smoker.

Most of the returning nurses remained single, but not Kit. She married her childhood sweetheart, local Little River farmer Joe Ryan and they raised three children. Kit never nursed again. She did, however, care for people in the township who were sick, as the nearest doctor was seven miles away in Werribee.

Kitty moved to Werribee after her children had grown up. She died there in 1953, at the age of 69, and is buried in Werribee Cemetery.

Kit kept a diary of her wartime experiences, and in 2013, the book “Kitty’s War” by historian Janet Butler was published, based on Kit’s diaries. It gives us an insight into the experiences and hardships faced by these courageous women. The book won the New South Wales Premier’s History Awards Prize for Australian History in 2013, and the WK Hancock Prize from the Australian Historical Association the following year.

In 2014, the Little River Historical Society was awarded over $50,000 from the Federal Government to build a nurses memorial to acknowledge the vital role of the Australian Army Nursing Service during the First World War, and specifically to honour local nurses Kit and her cousin Sadie McIntosh, who also served with the Australian Army Nursing Service during World War One.

The memorial was opened in July 2015.  It is located on the Rothwell Road land that previously belonged to Sadie’s family, and is made of local bluestone and granite taken from Kit’s former family home.