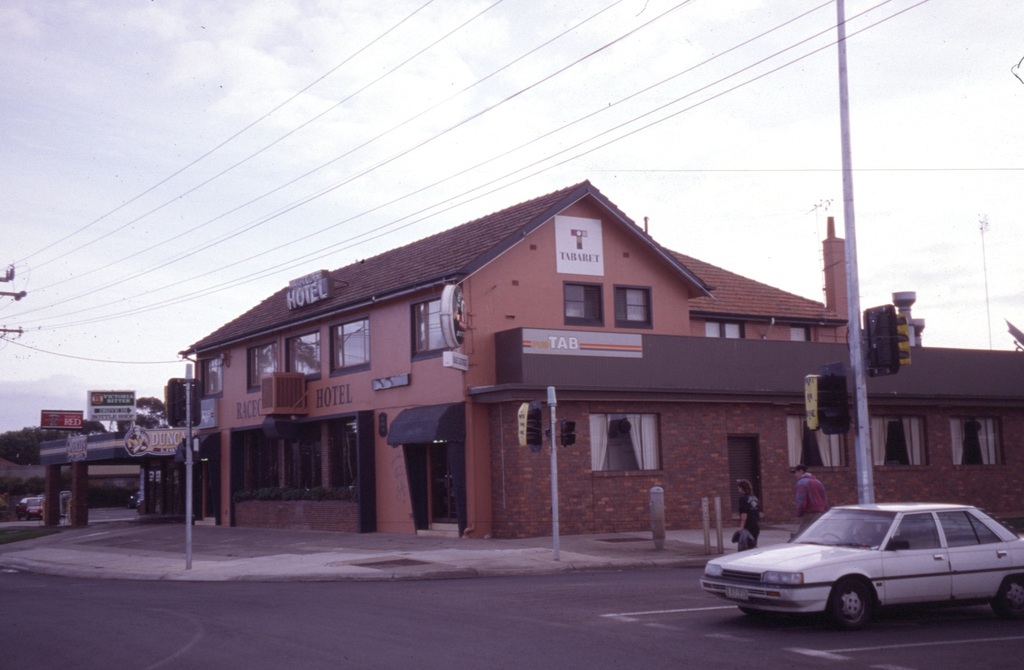 The Racecourse Hotel is a two storey building, apparently built in several stages.  Behind the Cottrell Street façade is a two storey Edwardian section, rectangular in plan, and retaining unglazed (Marseille) tile hipped roof and finial.  The main façade consists of a gable-roofed section flush to the frontage.  The window and door detailing is in the Early Modern style, using metal framed windows.

To the rear is a later extension, possibly 1970s, and another detached building that may be contemporary with the Cottrell Street façade.

The present 1930s Racecourse Hotel stands on an historic site (Allotments 7 and 8 in Section 3 Township of Werribee, Parish of Mambourin), and replaced two earlier hotels on the 1850s and 1880s.

The earliest hotel on the site, known as the Bridge Inn, was completed in 1851. Owned by Charles Nantes, a leading Geelong citizen, the corner site was purchased in 1850 for £40.  Elliot Armstrong, the first licensee also ran a blacksmith’s shop in the hotel yard.  The inn was a coaching stop between Melbourne and Geelong.  Ellen, Armstrong’s daughter, held the first Werribee school in a shed in the hotel’s grounds.  The historic importance of this building also relates to the first public meeting to establish a Werribee District Road Board, which was held on 29 December 1862 in Armstrong’s Inn.  Armstrong became the Board’s first secretary.

The Armstrong family was associated with the hotel over a number of years, the licence passing in 1879 to Michael Wall.  Shire of Werribee rate records confirm that Wall, hotel keeper was occupying the Bridge Inn in 1881-82.  It has been claimed that Wall changed its name to the Racecourse Hotel, most probably because he was “an enthusiastic supporter of racing and at that time a trustee of the Wyndham Racecourse and Recreation Reserve”.  Wall was later associated with the Werribee Club Hotel (now the Werribee Hotel) built about 1882 on the corner of Station and Werribee Streets.

The second hotel on the Cottrell Street site, also called the Racecourse Hotel, dates from the late 1880s after the earlier hotel was burned down.  The Melbourne Brewing Company was the owner at the time.  In October 1888 a Melbourne architect, Harry Lording of North Melbourne, called tenders for the re-erection of the Racecourse Hotel at Werribee.   By 1889-90 the property valuation had increased to £80.  Later by the turn of the century, when the Montgomery Brewing Company was the owner still, the licensee was Mary Ann Dixon, hotelkeeper.

A further change in ownership took place in 1912 when it was announced in the local press that Denis Canny had purchased the Racecourse Hotel from Mrs Dixon for £3,500.  During the 1920s, when the owner was Albert E. Doy, there was a further substantial increase in valuation, which reached £250 by 1922-23.

According to the Werribee History Kit, the building was rebuilt after it was destroyed by fire in the early 1930s.  At the time of the fire, the hotel was “an old established weatherboard structure of 20 rooms and Mrs Doy, wife of cross-country jockey Alby Doy, was licensee”.  The new owner  J.R. Doyle built a new hotel at a cost of £2,300.  Shire of Werribee rate records confirm that by 1934 John Robert Daley (or Doyle?) of 61 Ormond Esplanade, Elwood was the owner.

A recent inspection suggest that alterations may have been made to the Cottrell Street façade of the two-storey building, and extensions to the rear, possibly in the 1950s.