The Carter Family Of Werribee 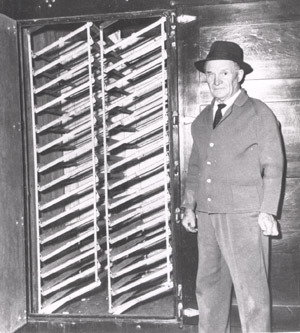 Walter Carter with standing next to a poultry incubator.

Unlike the Chirnsides they were industrial laborours. The first of the family to migrate were Sarah (nee Carter)and Joseph Woodstock in 1879. They lived at 179 Watton Street. Sarah’s brothers followed - John and Hannah Carter 1903. James and Mary Jane Carter and 5 children 1910 who within months bought and transported a house to Synott Street. Then bought a 2 hectare freehold in Synott Street and built a home.
In this backyard their son Walter began the family fortune — by raising chickens.

At their peak the Carter Family had built new premises and bought up land along Werribee River and were processing 1 million chickens a year and exporting to Britain 7 million eggs a year. They later became involved in real estate and sold their land for housing development.

Read the Carters story in Wyndham: our story p. 159- 169, or for a complete family history there is The Carter Family of Werribee by W.M.S. Carter.  Copies are available for loan from Wyndham City Libraries.