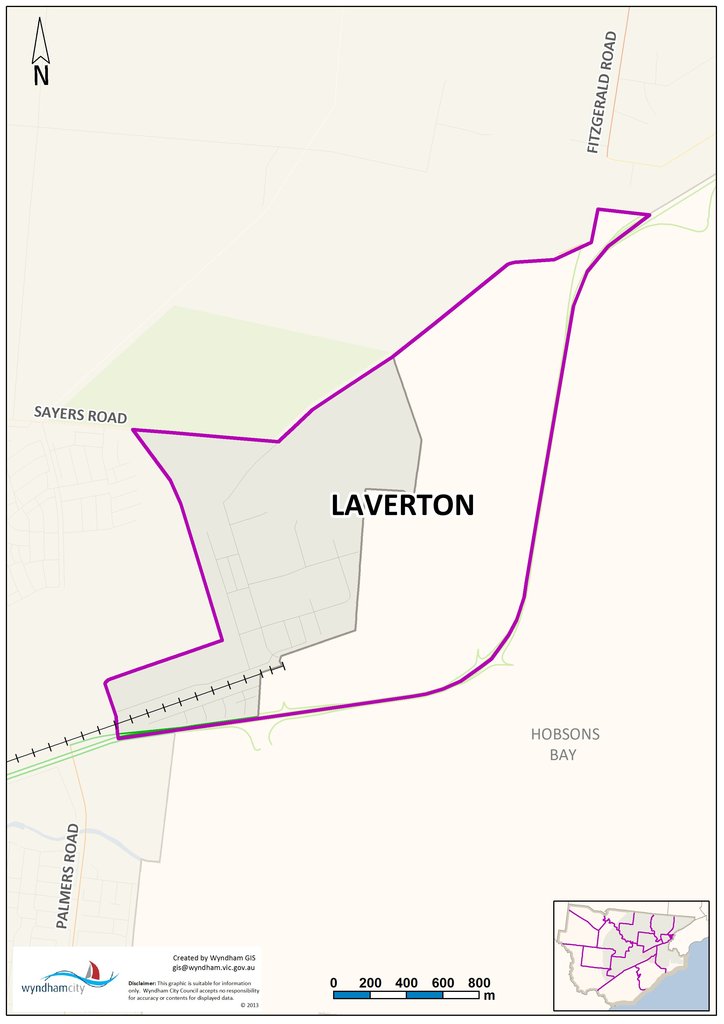 Laverton: An industrial working-class suburb 11kms east of Werribee named after pioneer pastoralist Alfred Langhorne’s Laverton Station which was itself named after the small village of Laverton in North Yorkshire, England.

Alfred Langhorne: A nephew of Captain Lonsdale, the first government officer to take command of the Port Phillip settlement, Langhorne had been an overseer in New South Wales before he came south and took over the Laverton and Truganina stations in 1836.  His property holdings extended from Williamstown in the east across Truganina north of the Melbourne Road.

A scandal in real estate: In 1886 real estate developers Staples, Wise & Co. promoted the sale of land for residential housing in a new suburb named Laverton on behalf of the Federal Investment Company of Australasia.

The Geelong–Melbourne railway line had opened up an opportunity for commuter housing development and Laverton was among the first of the Melbourne suburbs to grow along the rail line.  Laverton station was the first on the line out of Newport on the way to Geelong. Staples, Wise & Co. promised to build Laverton, the New and Model Suburb but their financial arrangements were fraudulent.  While they offered allotments for as little as £10 on one-tenth deposit, and build homes for no interest, Charles Staples created a scam.  He bought large tracts of land at one price, sold them to himself at an enormous profit, under the umbrella of a spurious bank his company had created, and then put the profits into his own pocket.  Even though Charles Staples was convicted of fraud and spent five years in prison, his suburbs were built pretty much as planned.

Development: The government had other plans for the residential and industrial development of Laverton.  In 1905 Captain Chirnside sold off 5,000 acres of his Werribee Park Estate, located between Laverton and Werribee, between the railway line and the Bay for subdivision into small allotments suitable for dairying and cultivation.

The RAAF at Laverton Base: In order to take advantage of the railway, the Royal Australian Air Force established an Aircraft Depot at Laverton in 1921. Laverton Air Base was renamed Williams Laverton Base in honour of its first commander, Point Cook graduate flying officer, First War ace Richard ‘Dicky’ Williams.  Houses were built for the families of Air Force personnel.  In 1955, after married quarters at the ‘Cabbage Patch’ were constructed on the base, a second primary school was opened.  Ten years later the school had more than 900 pupils enrolled.  Two more primary schools were opened, in 1967 and 1969 and Laverton High School was opened in 1967.