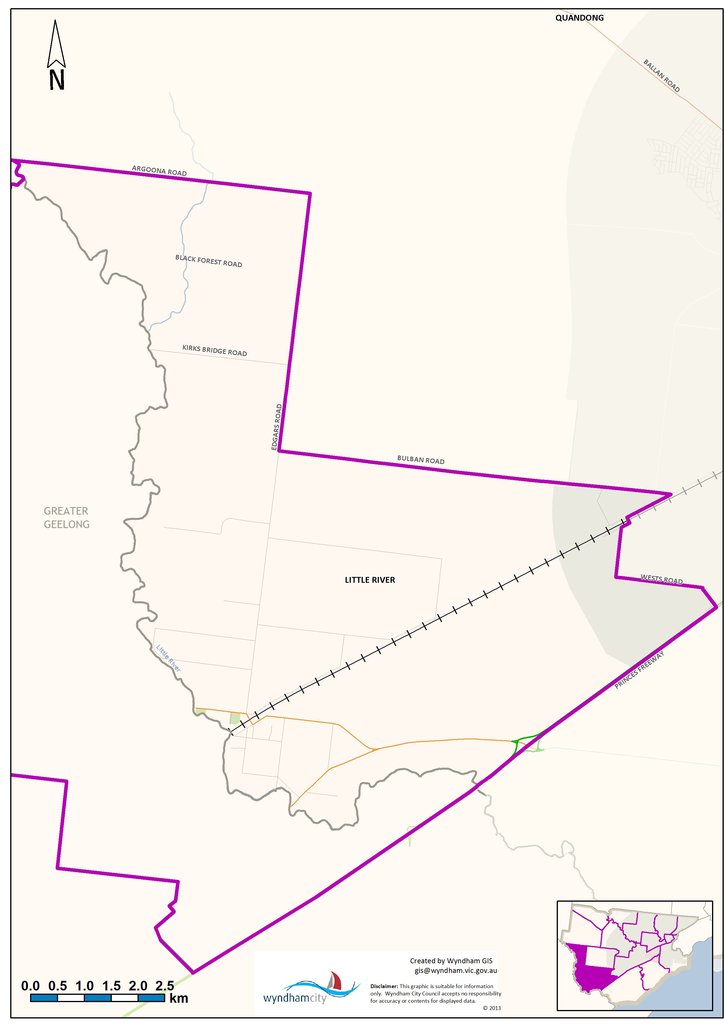 Little River: Little River is a residential and farming community on the western boundary of the Wyndham Shire and takes its name from the deep river that flows from the Brisbane Ranges to the sea near Lake Borrie. The river is just a bit smaller than the Werribee, hence its name.  In the early days of settlement, the road from Melbourne to Geelong had a crossing at Little River and the Traveller’s Rest Inn was built there in 1839.  A post office was opened in 1858.

Part of the Port Phillip Association’s first allotments, Lot 14 was taken up by pioneer James Simpson, Little River later became part of the vast Chirnside empire. When the Geelong to Melbourne Railway was opened in 1876, charming bluestone station buildings, and goods sheds, were constructed and Little River became an important hub for local farmers, graziers and haycarters who used the railway to carry their goods to markets in both Geelong and Melbourne. The line is still much used today carrying, mainly, commuters from across the outlying districts, in both directions every day.

Little River railway station has witnessed more than its fair share of spectacular accidents on the line over the years.  Several people were killed walking in front of trains as they crossed the line, farmers in carts were struck by passing trains and in 1884 a passenger train from Geelong slammed into an empty cattle train killing both train drivers and one passenger.

In 1938 the driver and fireman of a stationary goods train stopped at the station, leapt from the engine just as a passenger train from Geelong slammed head-on into it.

Today, the district, which is within easy commuting distance of both Geelong and Werribee, has grown to a population of around 1,500 residents living a rural lifestyle.

Robert Chirnside at Little River: Robert Chirnside, nephew of pioneers Andrew And Thomas Chirnside, purchased property north of the Little River township on the foothills of Mt Rothwell in 1865.  Here he built his own homestead in 1871.  By Chirnside standards it was modest building— a single-storey bluestone building of only twenty-two rooms, but its elevated setting with the You-Yangs to the north and west offered magnificent views across the Werribee plain, and beyond to Port Phillip.

Aboriginal History ‘Wurdi Youang’— The Mt Rothwell Stone Circle: A semi circular arrangement of rocks, known as Wurdi Youang, was laid on a flat piece of land near Mt Rothwell, just north of the Little River township. Named by local Aboriginals—‘Wurdi Youang’—the egg-shaped arrangement of standing basalt rocks has a circumference of 151 metres.  While no one really knows what the site represents, or what it was used for, astro-physicist Professor Ray Norris of the School of Indigenous Studies, Macquarie University, Sydney after examining the stone ring concluded that its precise alignment was constructed to map the sun.  He said ‘this can’t be done by guesswork, it required very careful measurements. If it goes back, let’s say, 10,000 years, that predates the Egyptians, the Pyramids [and] Stonehenge.’

Emeritus Professor of Archaeoastronomy Clive Ruggles, from the University of Leicester, England, conducted research at the Mount Rothwell site in 1995. He believes that the egg-shaped arrangement of stones, laid out on the flat above where the Mount Rothwell homestead now stands is an astronomical device although there is no record of what the arrangement could have been used for. When viewed from the eastern end of the arrangement large rocks on the western end indicate the position of the setting sun at the equinox and the straight segments to the north and south ‘indicates the sun’s setting points at the solstices when viewed from the eastern apex of the ring’.

Researchers believe that the arrangement predates the Christian era, and although others may dispute their conclusions as to the function of the circle, it is known that it is not the result of European settlement.  The Mount Rothwell stone circle is one of only four such arrangements found in Victoria, and certainly predates the arrival of European settlers.  It could quite easily be as old, or older, than Stonehenge.

Sorry plight of Aborigines on Little River: Not long after settlement of the district by Europeans the Protector of Aborigines, George Augustus Robinson, noted that the Worinyaloke-Bullik tribe, a sub-group of the Wudthaurung, who occupied territory to the west of Little River were all but extinct by 1846.  One lad named Meenmulger was all that was left and a Mr Thomas Walton took him to England.  Another local aboriginal was named Billy Leigh, also known as King Billy; he was of the You-Yang tribe and had been taken in to live with the Armytage family on their Wooloomanata property when he was a lad.  Billy was employed to drive the family’s carriage and horses—to convey their guests to catch early morning trains at Lara Station.  Dressed in black coat, belltopper and leggings, on his way back from the station Billy would pick-up children and give them a ride to school.  He was the last of his tribe.