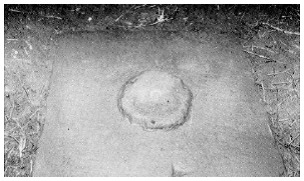 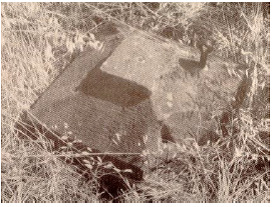 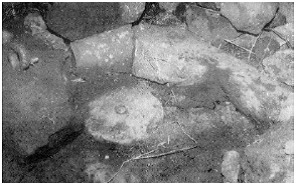 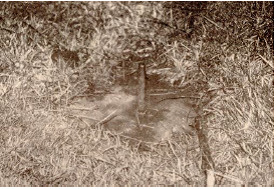 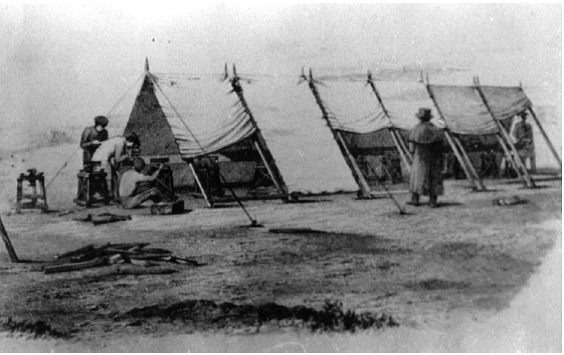 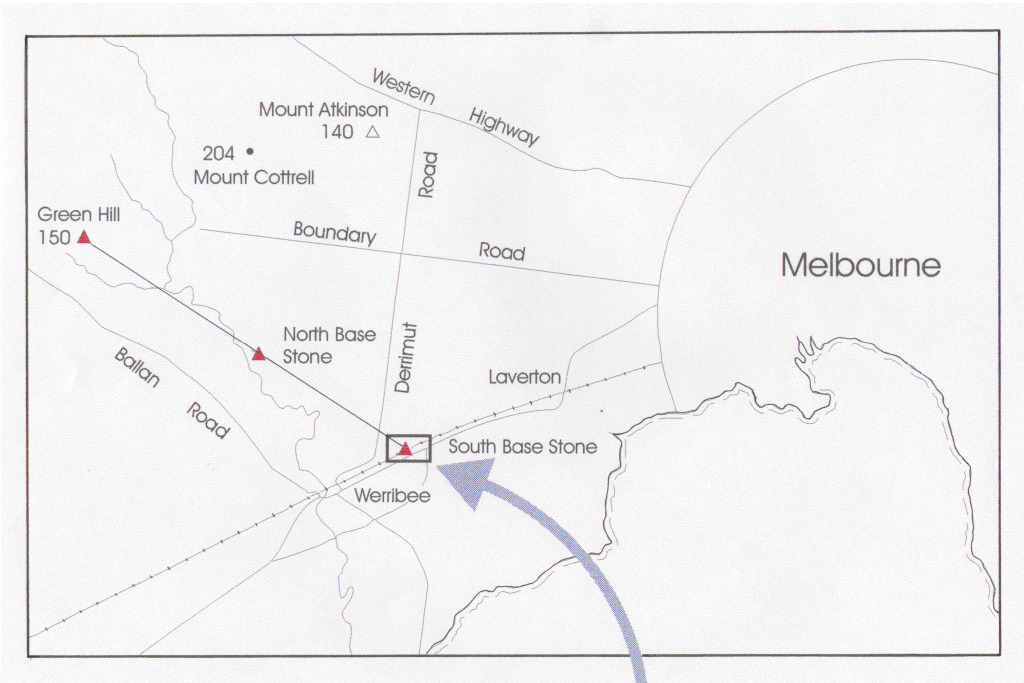 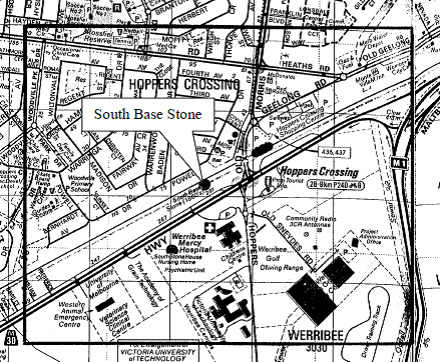 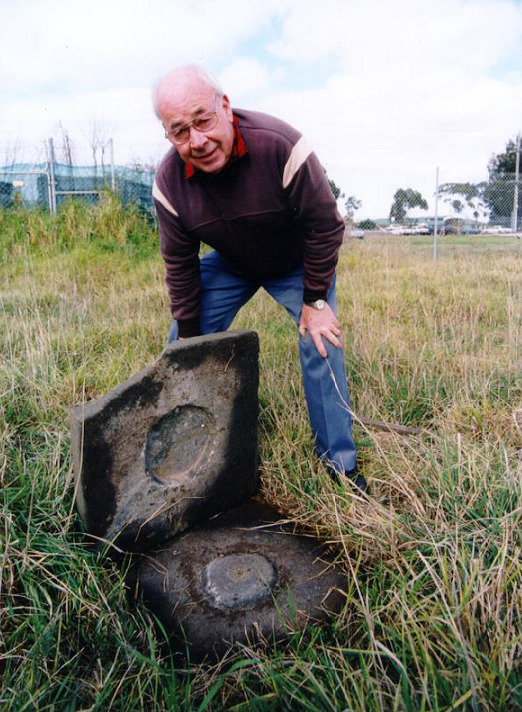 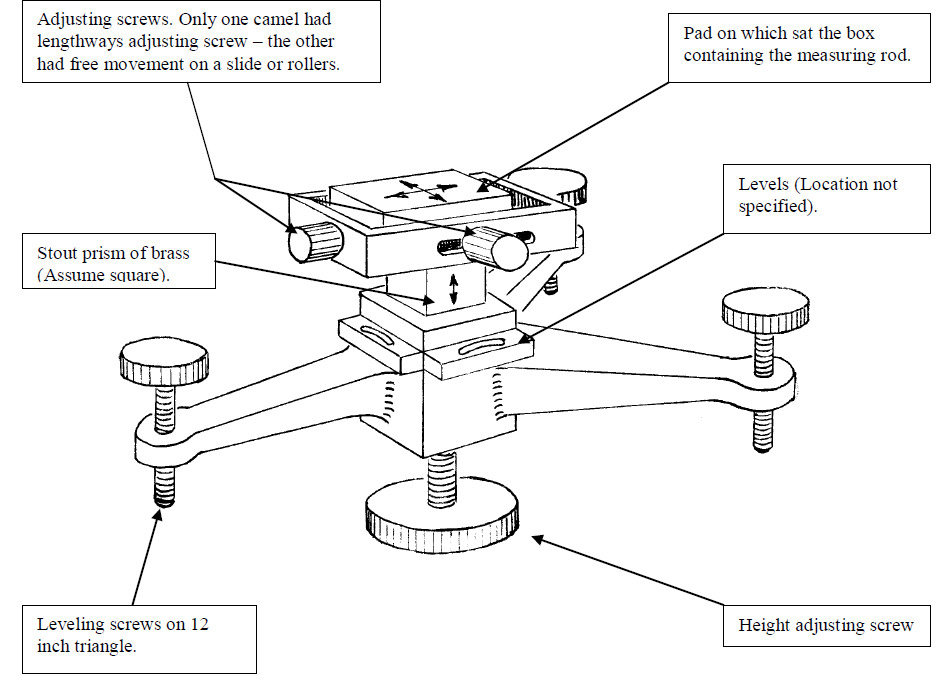 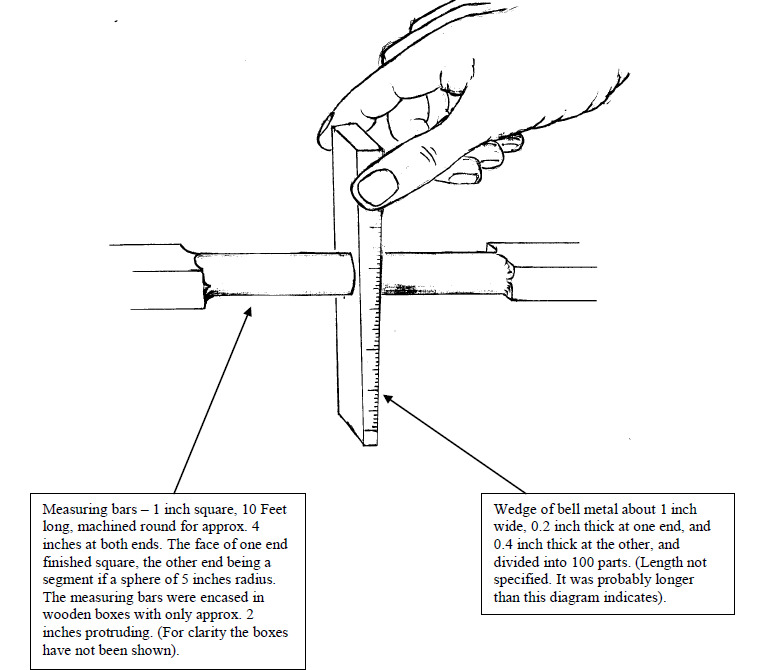 South Base Stone
[a history by Lance Pritchard]

South Base Stone
At some time we have all had the need to look at a map of a part of Victoria.  However, have we ever wondered how the first accurate map was produced? How did they know where to draw the main features?  The mounts, hill tops, rivers and the location of towns that were becoming established in the mid 1800s.  How could they arrange titles for the many farming properties without being able to accurately describe its location relative to a known point?

If you remember back to your trigonometry classes, we were taught that ‘if you know the length of one side of a triangle, and you know the two included angles, you can calculate the lengths of the other two sides.’  It was decided to use this principal as a rapid method to survey the whole of Victoria.
(Refer Extract 1)

A site had to be selected on relatively level ground where a long line could be very accurately measured in length and angle.  This line would form the base of a triangle from which a network of triangles could be surveyed.  This would cover the whole of Victoria - from Mt. Gambier, just over the South Australian border, to Cape Howe in the east, from Wilson’s Promontory up to the Murray River in the north.

Named the Geodetic Survey of Victoria, this would enable the distance and location of natural and manmade features to be accurately calculated and therefore shown on maps.  The site chosen for the commencement of the southern end of this base line was Werribee, at a location on the Railway Easement approximately 300 metres South West of the now Hoppers Crossing railway station.
(Refer to accompanying maps.)

At the starting point of this line a solid stone was set in the ground which is known as the South Base Stone.
(Refer Extracts 2 & 3)

This paper was read before the Victorian Institute of Surveyors, 4 September, 1891.

Extract 1
"The Geodetic Survey of Victoria was commenced in September, 1858 and its operations were practically terminated in 1872.  The circumstances that led up to this form of general or systematic survey may be summarised as follows: The demand for land was generally in excess of the power of the Survey Department to meet it."

Extract 2
"In January, 1860 a site for a base line was selected on the Werribee Plains, 4.942 miles long. The one end (South end) being within the Railway enclosure, about two miles E. of the Werribee station, the N. end bearing 304º 36'31", 26091.826 feet, or 4.9416 miles and in a direct line with a hill named Green Hill, on the west side of the Werribee River, 5.651 miles distant from the N. end.  On this hill a permanent point was established, and the measured base was ultimately extended by triangulation to this point, which was named the Green Hill extension."

Extract 3
"The ends of the measured base were marked by solid masses of masonry built five feet into the ground, capped by a heavy stone with large plugs of gun metal, having platinum centres on which was marked a fine terminal dot.  Over this cap-stone was placed a heavy cover-stone for protection, and above all a timber pyramid with pinnacle carefully centred over the platinum point to help in alignment and subsequent triangulation for checking, and for extension and expansion of the base.  The Green Hill extension terminus was marked by a heavy sunk stone with centre similar to the ones already described.  The actual measure of the base was commenced on 29th January, 1860, and ended 29th May and minor triangulations for extension to Green Hill was completed June 12th”.

Extract 4
"First a complete measurement of 4.942 mile base was made by level bars, and then a re-measurement of 2.11 miles of the S. end was made with bars following the general inclination of the ground.

The apparatus used was as follows:
Three measuring bars, ten feet long, of iron 1in. square, with the ends turned round for about 4 inches in length, one end being finished quite flat and polished, while the other end was a polished segment of a sphere of 5ft. radius.  Each bar was provided with levels, thermometers, and aligning vanes, and were encased in wooden boxes for nearly the whole length, about two inches at each end only projecting.  For supporting the bars, well-made strong pine tripods, or trestles, of various lengths were used, varying from 12 inches to 42 inches in height, the top being a triangular frame 12 inches on the side, the three feet being at the points of a triangle of 20 inches.

On these trestles were placed instruments called Camels, which consist of a heavy brass tripod with levelling screws, through the centre of which, in a well-finished socket, rises a stout prism of brass actuated by a strong screw underneath for raising and lowering the prism. On the top of the prism is a little table, or slide-rest, with rollers, and screw slow motion work of all metal.  To receive the three tripod levelling screws, metal sockets are fixed on the top frames of the pine tripods, or trestles. In order to place a bar two trestles are put up 5 or 6ft. apart, with a Camel on each, and the bar laid on the Camel tables, on which they fit easily, and resting on the rollers, can be moved endways with facility and great smoothness.

One Camel carries a slow motion or tangent screw for moving the bar lengthways, while both have screws for sideway motion.  And the vertical motion for raising, lowering, and levelling the bars is given by the prism and its screw."

"The measuring bars were assumed to be 10 feet long, their actual lengths in terms of the Melbourne edition of the British 10 feet standard were as follows:-

Extract 5
"The three bars were laid on the Camels with the flat or squared ends about an inch apart; each of the bars was aligned by an observer with a 6inch theodolite in advance by means of the two sight vanes on the bar case, the bars were then levelled.  The second bar was brought back by its slow motion screw till within about one-fourth of an inch of the first bar, but never to touch it, and the third the same way; the bars were finally levelled aligned, thermometers read and recorded.  The Officer in charge then proceeded to measure the intervals between the bar ends.  For this purpose a wedge of bell metal was used; it was about 1 inch wide, 0.2 inch thick at one end, and 0.4 inch thick at the other, and divided on one edge into 100 parts.  The Officers slid this wedge carefully between the bars keeping it flat against the square end and feeling immediately it came in contact with the rounded end of the next bar; the divisions on the edge of the wedge were read and recorded."
(Refer Appendix 2)

Extract 6
"To prevent exposure of the bars to sun or rain during measurement a kind of tent was used, consisting of a pair of strong but light frames, 12 feet long and 9 feet high, hinged together at the top and covered with canvas laced to the frames, and in vertical cross sections were like the letter A.  There were four tents and four men could move one quickly.  As soon as the back bar was done with it was moved forward to the empty tent in front and the tent-bearers then carried the back tent to the front and so on."

For a period of 30 years the location of the measuring bars was unknown, then in 1986, they were found in storage at the Melbourne Museum.

Photographed in 1986 with one of the measuring rods are L. to R. Mr Ray Holmes Surveyor-